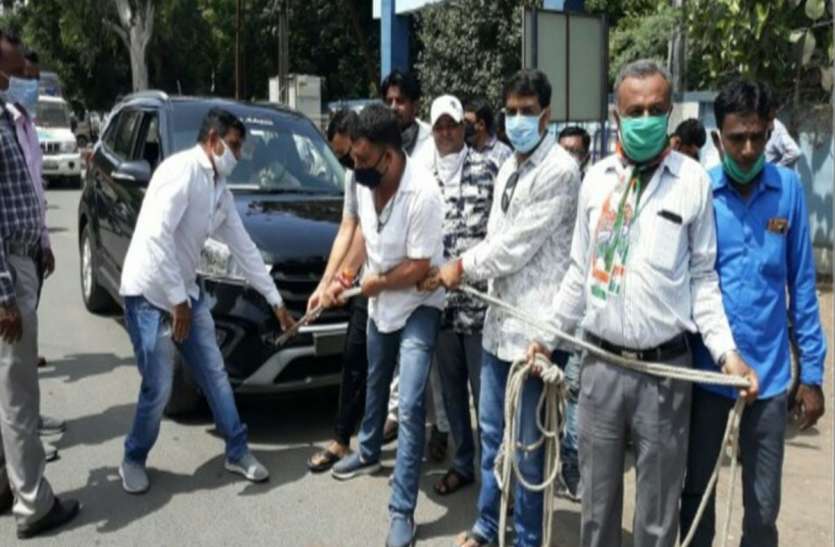 Ahmedabad. The Congress was agitated by the rising costs of petrol and diesel on Monday, staged a sit-in protest throughout Gujarat. From Ahmedabad to Rajkot, Vadodara, Jamnagar, Congress employees who took to the streets in many cities of the state demonstrated on a bicycle, whereas on a horse-carriage, they expressed anger towards the federal government.

A sit-in was held in entrance of Sardarbagh close to Laldarwaja in Ahmedabad below the management of Gujarat Congress President Amit Chavda and City Congress President Shashikant Patel. After the dharna, after marching on the statue of Sardar Vallabhbhai Patel in Sardar Bagh, he began the march from Sardar Bagh in Laldarwaja. Congress leaders and activists have been ‘take again the petrol-diesel rate hike’ and have been marching towards the central and state authorities and shouting play playing cards, however the police convoy close to Sardarbagh gate tried to cease them. During this, there was fierce conflict between policemen and protesters. During this time, site visitors was blocked for a while.

Performed by pulling the automotive

Jamnagar The steady increase in the costs of petrol and diesel is being opposed as an alternative. But in Jamnagar, the District Congress Committee protested in a special method. Here Congress leaders and employees tied the automotive with a rope and pulled it to the Collector workplace. The protesting Congressmen stated that the way in which the costs of petrol and diesel are being elevated each day by the Central and State Government, the poor and center class individuals are dealing with probably the most issues. In such a method, how can farmers purchase diesel and do farming. In addition, this increase will straight have an effect on the sale of all items.
………………….